The achiote plant is a flowering shrub native to Mexico and South America that produces beautiful clusters of pink and white flowers. The achiote’s spikey fruit pods are not edible, but its seeds (called annatto) and the red pulp that surrounds them are edible and have many culinary, cosmetic, and medicinal uses.

Annatto seeds range in color from red to deep orange to yellow and are used as coloring in a variety of foods, including cheddar cheese, butter, custards, baked goods, and even sausages. In the United States, annatto is considered by the FDA to be exempt of certification because it is a natural, non-synthetic food coloring.

Annatto seeds are dried and crushed and made into a paste, or soaked in oil to add flavor and color to many traditional Latin American, Mexican, and Caribbean dishes. But annatto’s use is not limited to its native growing regions. Many Vietnamese and Filipino dishes include annatto. In Europe it is also used as a food coloring. And hundreds of years ago, the Aztecs used annatto to enhance the color of their chocolate drink.

The seeds themselves can be chewed (although they are very hard) and their taste has been described in various ways ranging from peppery to clay-like.

Annatto as a Natural Cosmetic

Sometimes called the “Lipstick Plant” because of its red seeds, the use of annatto as a cosmetic dates back thousands of years to the ancient Mayans who used it as body paint. Today you might find annatto listed as an ingredient in your shampoo, body cream, or make-up. As with its use as a food coloring, the FDA considers annatto a safe additive.

Today we have blueberries and kale as our “superfoods,” but for centuries annatto has been used to treat or cure a variety of ailments. The red color that coats the seeds comes from the carotenoid bixin, an antioxidant beneficial to eye health that may help prevent cataracts, macular degeneration, and other eye diseases.  We already know how important antioxidants are for cleaning up free radicals in our body and for our overall health. Ancient people knew this too; they just got their info from different sources than we do today.

Paste made from annatto seeds have also been used to treat:

We mostly think of the seeds for their natural antioxidant and medicinal properties, but the leaves are also edible and are high in fiber and calcium — good for bone health and for keeping your digestive system running along smoothly.

The Most Amazing Aspect of Annatto – Tocotrienols 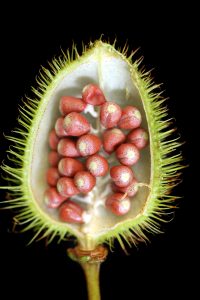 In addition to its other properties, annatto is a natural source of vitamin E — but not the type of vitamin E you usually find in health food stores, which are tocopherols. That vitamin E compound was first discovered about 100 years ago and for decades touted for its antioxidant properties. It wasn’t until 40 years later that tocotrienols were identified as a distinct and different form of the vitamin.

Unlike tocopherols, which come in both natural and synthetic forms, tocotrienols are derived solely from natural sources like annatto. And the tocotrienol vitamin E compound DeltaGold® uses a patented natural evaporative method that does not use any harsh or synthetic chemicals, petrochemicals, or solvents to extract the vitamin E compound from the annatto plant’s seeds.

Today, studies are finding that tocotrienols are far superior to tocopherols in several ways and their health benefits are far-reaching.  For example, tocotrienols:

Whereas vitamin E tocopherols are readily obtained from foods (nuts, oils, seeds, and some leafy greens all contain vitamin E), we cannot get the tocotrienol form of vitamin E from the foods we eat. The good — great — news, however, is that not only are the tocotrienols contained in supplements like DeltaGold® wholly natural and non-chemically extracted, they are completely safe and their only side effect is improved health.

These statements have not been evaluated by the FDA. This product is not intended to diagnose, treat, cure, or prevent any disease. The information contained within this website is for educational purposes only. It is not intended to replace the advice or attention of health care professionals.
Copyright © 2022 · Dr. Barrie Tan · All Rights Reserved · References · Privacy Policy